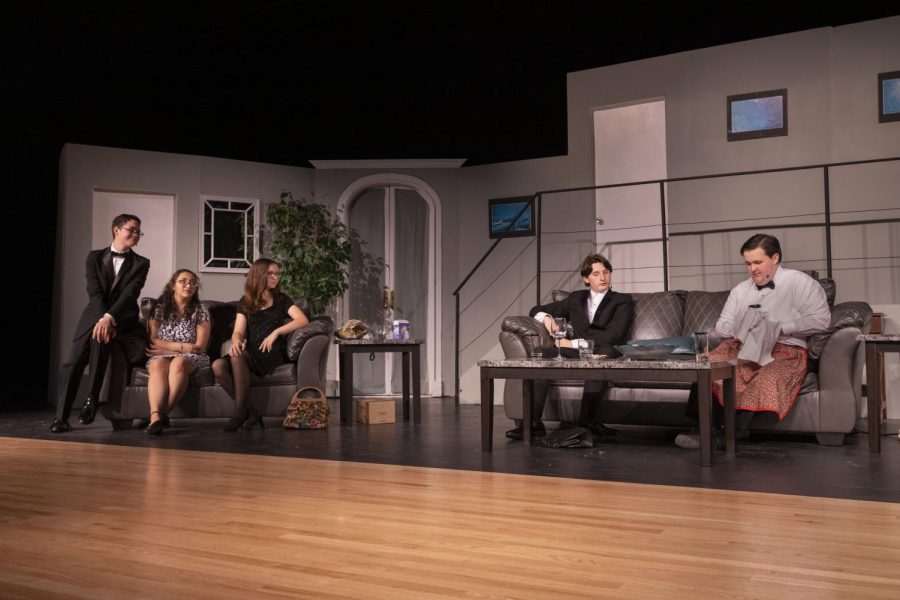 The West Haven High School Theatre Workshop will open the school’s brand new theatre with a production of Neil Simon’s “Rumors” this Thursday and Friday.

“Rumors” is a comedy centered around four couples who arrive to a house party, only to find that the host has shot himself in the head and his wife is missing. As each couple arrives, the others put up a subterfuge to keep them from finding out the truth (only, nobody can remember who has been told what).

“Everybody tries to hide the truth from each other,” remarks Julio Sanchez, who plays accountant Lenny Ganz. “The police come, and we have to make up a whole new story just to hide it.”

Adeline Melillo, who plays famous chef Cookie Cusack, says she really likes that “It’s all one set, and everyone gets to be onstage at the same time. It’s really funny.”

The actors are supported by their crew, who are responsible for the production’s hands-on tasks.

“I do light cues, and make sure props are in the right place,” says Vinny Damiani, the show’s stage manager. “I make sure the cast members are okay and have the right stuff they need for their part.”

The play will be presented in the school’s newly built auditorium.  Director Mrs. Margaret Maher said construction finished three and a half weeks ago. The new auditorium is located in the G-wing near the guidance room.

“I’ve been to theatres all over the world, and its the best one I’ve ever been in,” she said, adding that the students are very excited to perform in the new auditorium.

The play will performed on Thursday, Oct. 24 and Oct. 25 at 7:30 pm. Tickets are on sale $5 for students and $10 at the door for adults. Tickets can no longer be bought in advance.