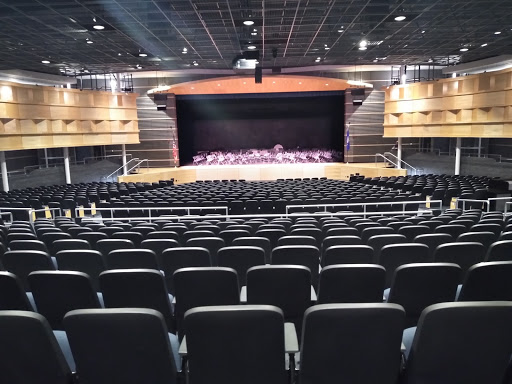 West Haven High School now has a state-of-the-art auditorium as part of the new building project.
The auditorium, which has college look and seats about 800 people, is expected to help recruit new people to the theatre program.
Junior Jenna Massaro called the new auditorium “a home away from home,” and said she gets an adrenaline rush from being in there.
Theatre director Margi Maher said she’s thrilled with the new performance space for her students. All technical aspects of our new space are top notch and user friendly.
“There isn’t a bad seat in the house,” Maher said, adding that the new auditorium is extremely handicap accessible.
Crowds will also enjoy the new auditorium.
Highlights are wooden acoustic panels to amplify the sound of anyone at the mic and any music that is being played. Another feature is a cat walk above the stage and about the seats in the house that are used to focus the lights and for the backstage crew to move around.
“We’ll really be able to showcase the kids in the best light possible,” Maher said.
Last fall, senior Daniel Gallipoli portrayed Ken Gormanin the first play stage in the auditorium, “Rumors,” by Neil Simon. Gallipoli said that he likes how the shape of the auditorium helps with acoustics, especially when the actors are wearing mics. That’s when the sound “fills up the whole room,” he said.
Maher said theatre is her life and watching kids find a place where they belong is a great feeling. Theatre is truly a home for so many kids, a place wehre life-long friends are made.
The Theatre Department will be performing its first musical, “Joseph and the Amazing Technicolor Dreamcoat,” in the new auditorium in March.
Maher said she had a nice turnout for the auditions for the musical, which may be because the actors want to perform in the new space.
“Joseph and the Amazing Technicolor Dreamcoat” will be performed March 19, 20 and 21 in the new auditorium.